The more we learn about war, the more important it becomes to sing about peace. 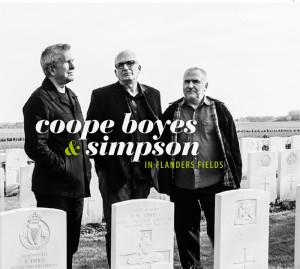 Peace has been a recurring theme of the powerful and distinctive singing and songwriting of the English acappella trio Barry Coope, Jim Boyes and Lester Simpson. It was the strength of their writing about the events of the First War that first led Piet Chielens, now Co-ordinator of the In Flanders Fields Museum in Ieper, to commission them to perform and compose music for the Flemish arts organisation, Peace Concerts Passendale in 1993. They eventually took part in five different Peace Concert productions in Belgium and England, performing on former battlefields like Hill 60, among the memorials at Tyne Cot and at the request of the town of Passendale for their eightieth anniversary commemoration of the battle of Passchendaele. These experiences then inspired their words and music production, In Flanders Field, which combines their own writing with the biting humour of the Tommies’ wartime observations and music. Songs like Jim Boyes, “Flanders” and Lester Simpson’s, “Standing in Line” and Barry Coope’s singing of “Robin’s Song” were also the reason that the author, Michael Morpurgo, asked them to join him in concert performances of his novel Private Peaceful, with its message of the futility of war and later, in the adaptation of The Best Christmas Present in the World, his story about the Christmas Truce of 1914. In Flanders Fields is the culmination of this involvement, bringing together newly written songs, existing and first time recordings of songs from Peace Concerts Passendale and songs and music of the “War to end all Wars”.

COOPE BOYES & SIMPSON IN FLANDERS FIELDS
Piet Chielens, Co-ordinator of the In Flanders Fields Museum in Ieper writes:
The work of the British a cappella trio Coope Boyes & Simpson has been at the forefront of musical commemoration in the West Flemish Front region for twenty years. Their body of work dedicated to the First World War can be considered in itself as an important lieu de mémoire, as a mental place of contemporary commemoration. In Flanders, no artistic initiative seems to have been more successfully involved with the theme than that of this trio from the North of England.

These albums and associated book give in music, word and image an overview of the work of Coope Boyes & Simpson about the First World War in Flanders and beyond. At the same time it is a new chapter in their work. Never before was remembering with music and songs richer, more varied and more comprehensive.

COOPE BOYES & SIMPSON REVIEWS
As passionate a tour de force of unaccompanied singing as you can imagine. Mojo
Inspired. Barbed lyrics, a wide pitch range and thrilling bass sonorities swapped between all three. If there were such a thing as postmodern folk music, this might be it. The Guardian
… quite simply the best purveyors of acappella song on these Islands. Rockn’Reel
Impassioned acappella. The Daily Telegraph